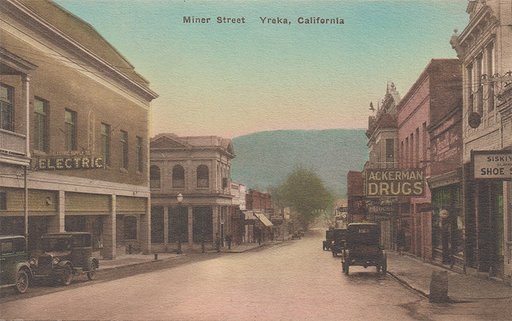 “With so many gold-seekers already in California due to the ’49 gold rush, it wasn’t long before word got out, and within six weeks of Thompson’s discovery there were 2000 miners on Yreka flats. In those early days it was known simply as Thompson’s Dry Diggings, and was basically a huge camp full of transient gold miners. By August of that year, as the miners discovered that this area was the “second mother lode,” the population swelled to 5,000.”

“In early 1852, with the population continuing to grow, the State Legislature created Siskiyou County. At that time, because there was another town called Shasta in the region, Shasta Butte City changed names again, this time choosing the local Indian word for Mt. Shasta—Yreka.”

“Over the next few years, Yreka was slowly transformed from a crude gold-rush boomtown into a bona-fide city. Residents began to commit themselves to a more permanent way of life, and put into place the fundamentals of a strong, durable community.”

“However, as Yreka matured and became established, the economic incentive responsible for its creation was receding–the gold rush was gradually coming to an end. By 1871, the population had dwindled to just 1,100, and then, on July 4th of that year, disaster struck—a fire burned down a good portion of the town, including most of the business district.”

“But the town came together and rebuilt, stronger (and more fire-proof) than before. Ranching, farming and timber replaced gold as a more stable and sustainable economic base. And once again, Yreka began to grow, and today is still the most populous city in Siskiyou County.”