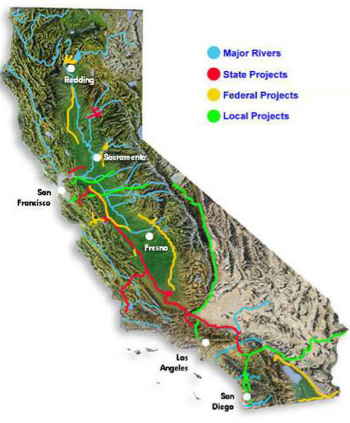 Timeline For Northern California circa 1850's

"1849 - Miners began to divert water from streams high in the gold country, carrying it through wooden flumes, dropping it through penstocks to generate hydraulic pressure, and then using the pressurized water to blast away hillsides containing valuable ore. The miners then washed the debris through sluices to separate the gold from its surrounding sediment.
1850 California's first constitution legalized the "riparian" doctrine of water rights giving those owning land bordering a stream the full rights to reasonable use of the water while owners of land that did not border streams had no rights to the water. This effectively allowed a tiny number of landowners who owned land along water courses the sole right to divert water, thus monopolizing and leaving downstream owners with nothing.
1851 - California's Legislature adopted the "prior appropriation" doctrine of water rights which allowed to be transported far from the original river or stream. This "finders-keepers" rule allowed the first users of water the unrestrained right to divert it from the stream.
1855 In Irwin v. Phillips, the California Supreme Floods, Droughts, and Lawsuits Court was asked to decide whether the miners' rule of prior appropriation or the common law doctrine of riparian rights should apply. The court recognized that the custom of the miners worked well in practice and was commonly accepted as the most fair and efficient means of apportioning water in times of shortage and therefore adopted the rule of prior appropriation as the law of the state.
1860s - Private parties controlled the distribution of water in Southern California and San Francisco."
​

Timeline For Northern California circa 1940's

"1937 Construction on the Central Valley Project (CVP) finally began after the state asked the federal government's Bureau of Reclamaation to carry the costs. The first deliveries to Contra Costa County began in 1940, but construction continued into the 1990s. The CVP had as its capstone a large dam on the Sacramento River (at the location of today's Shasta Dam) to control the flow of the river and distribute the water to users in the Sacramento Valley, the Delta, and the northern San Joaquin Valley. A smaller dam on the San Joaquin River northeast of Fresno would divert most of that river to irrigate lands in Madera, Kings, Fresno, Tulare, and Kern Counties. Riparian water users on the San Joaquin River below the dam, as well as lands on the west side of the San Joaquin Valley that relied heavily on groundwater, would be supplied by water pumped from the Delta via a series of check dams on the San Joaquin River.
1941 The Colorado River Aqueduct was completed.
1945 - The idea of a State Water Project formally began with the California Legislature's passage of the State Water Resources Act. The Act created a Water Resources Board to investigate California's water resources and formulate plans to address water issues throughout the state."